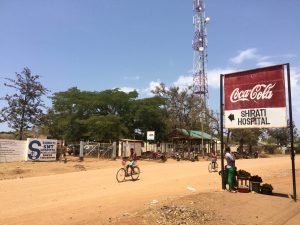 I like to minimize surprises as I embark on new adventures, so I did some research before I set off for Shirati Hospital. I talked to former missionaries about some of the basics of Tanzanian culture, contacted other students who had spent time at Shirati, and pored over the hospital’s website for clues as to what I might experience during my month there. As a result, I wasn’t taken aback by the green cloth sterile gowns, caps, and masks used in the operating theatre. I wasn’t shocked that there was no CT scanner or MRI in the hospital. I wasn’t even surprised at the large open-air wards separated by age or sex, despite the fact that the greatest number of occupants I had previously seen in a single room was two patients. Knowledge is power, I hoped… but in reality, I still felt rather clueless about what I was getting into. 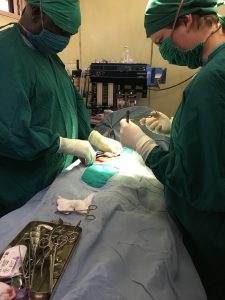 My first surprise was how utterly helpless I felt while the entirety of life around me was being conducted in a language I did not understand. I had traveled outside of the United States before, but mostly in Latin America since I was fluent in Spanish. I knew that I was in for a very different experience, though I was blessed to make the journey to Shirati with someone who knew Swahili and the Tanzanian culture well. Still, people had to make a conscious effort to include me in discussions (which didn’t always happen), so I became proficient at daydreaming during lengthy conversations I couldn’t follow.

When I began rounding in the hospital, however, I discovered that I had underestimated the frustration of not being able to communicate freely with patients. Part of the reason I am pursuing Family Medicine is that I love learning a patient’s life context and why each is the way he or she is. I desperately missed hearing the full story directly from the person seeking care: the only information I got was that which someone was kind enough to interpret into English. Sometimes that caused me to learn important information a little late, such as when I discovered that a vigorously coughing patient we examined had active tuberculosis. I will remember this feeling as I continue my medical training in an area with large refugee and Latino populations, as I now have a tiny glimpse into how confusing the healthcare experience can be for patients and providers that do not speak the same language. 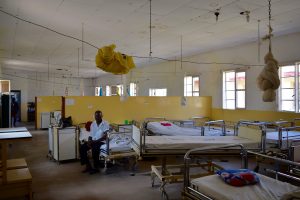 Beyond communication barriers, I was startled by the complexity of running a hospital when resources are tight. Shirati Hospital is funded both through Mennonite connections and through the Tanzanian government, which can lead to difficulties if financial compensation or supplies from the government do not come when they should. In stark contrast to the provide-care-now-collect-payment -later system in the United States, patients owe 10,000 shilingi (approximately $5) before they are admitted to a ward. In addition, they must pay up front for needles, IV equipment, lab tests, medications, and other treatments that are used in the course of their care. This meant some people were never admitted for care, and others might leave before they were cured, opting for traditional healing that might seem more affordable. While this seemed harsh at first, I learned that this policy was in place to prevent the consequences of patients absconding without paying for the services they received. After all, a bankrupt hospital cannot provide care to anyone. 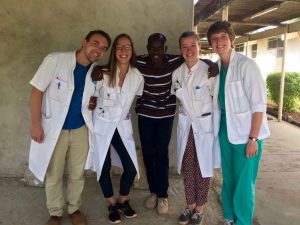 Dr. Opanda (center) with three medical students from Maastricht University in the Netherlands and me (far right)

Every day, I was faced with the challenge of puzzling through a diagnosis and plan for patients without the labs, imaging, and other data on which I typically rely. Many patients improved and left without us knowing exactly what was going on. Some truly required further testing that was not available, like the baby with febrile seizures and likely meningitis that eventually passed away: what wouldn’t I have given for an analysis of his cerebrospinal fluid! Other times, definitive diagnosis was possible, but it took a lot of work. The hospital’s ultrasound was not functioning during the month I was there, so there was no way to see what was going on inside an abdomen. Once, an extremely anemic woman arrived with heavy vaginal bleeding. We did not know if she had an incomplete miscarriage and needed a dilation and curettage, or if she had a ruptured ectopic pregnancy and needed surgery. Eventually, someone left the hospital in search of a portable ultrasound at another health center. When he returned two hours later, it was only a matter of minutes before we determined the patient needed a D&C and could roll her back for the procedure. 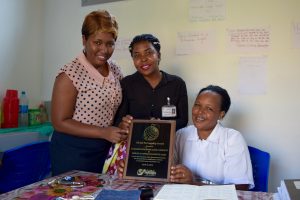 Leaders of the hospital see the seemingly endless needs and work to address them, step by step. Inspired by a power outage during an overnight surgery many years ago, there are now solar panels to deliver reliable backup electricity. Other solar panels near Lake Victoria a couple miles away provide power to pump water up the hill to the hospital, allowing taps to run throughout the buildings. A five-bed intensive care unit is under construction so unstable patients may receive more clinical attention than when they are a part of a 20-30 bed ward. Possibilities to improve imaging and diagnostic capabilities are being brainstormed. An innovative Palliative Care team is expanding its services to support a growing population of patients with chronic and terminal illnesses, like HIV, diabetes, and cancer. And these are just a few of the projects in progress. The needs are many, but at Shirati, I saw a hospital that continually explores how to provide better care to its patients, harnessing the ideas of a dedicated and talented work force.

Despite the attempts to prepare for what I was going to experience during my time at Shirati, I was forcefully reminded that healthcare is unpredictable in general, but being a participant in healthcare while immersed in a new culture requires a very different level of embracing spontaneity. I needed open eyes, an open mind, and an understanding that medicine is much more than my thoughts on a correct path to diagnosis and treatment. I appreciated more fully the importance of communication and education, knowing the availability of resources, and the awareness of how culture always influences what happens when healthcare providers are not watching. As I begin my Family Medicine residency at North Colorado Medical Center, I will be more aware of the immense privilege of resource availability, but also more intentional about bridging cultural and communication barriers to providing care. Even beyond that, however, I hope to channel Shirati Hospital’s spirit of constantly reassessing shortfalls and needs, celebrating the victories, and always striving to improve the quality of care I provide with the physical or personal resources to which I have access. 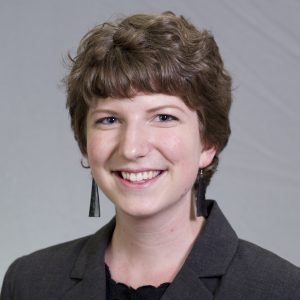 Elisa Troyer, MD, MPH
Elisa Troyer is from Harrisonburg, Virginia, where she grew up in Mount Clinton Mennonite Church. She graduated from Eastern Mennonite University in 2011 with a BA in Biochemistry and a minor in Spanish. She has always loved the sciences, but it was her experiences during college in Central America and Peru that revealed the joy, challenges, and satisfaction of working in medicine – especially in a cross-cultural setting. At Eastern Virginia Medical School, Elisa finished a Masters in Public Health in 2014 and graduated with her MD in 2017. She is now pursuing her training in Family Medicine at North Colorado Medical Center in Greeley, Colorado. Elisa was so thankful for the opportunity to spend time in Tanzania at Shirati KMT Hospital for her Student Elective Term.