The Mennonite Medical Association (MMA) and the Mennonite Nurses Association (MNA) were formed in the 1940’s as organizations for Mennonite physicians and Mennonite nurses respectively. Throughout the years these two organizations have enjoyed a rich history of service and mission. In addition, MNA & MMA provided an avenue for fellowship among Anabaptist nurses and doctors and their families.

The healthcare arena was much simpler in the early days of these organizations with physicians and nurses as the primary healthcare disciplines. This is in considerable contrast to the multidisciplinary approach in healthcare today. Since those simpler times, medical knowledge has expanded exponentially, regulations have multiplied tremendously, and ethical dilemmas have intensified significantly.

Visionaries within leadership of MNA & MMA, being cognizant of these changes, started asking, “How can we as faith-based healthcare organizations be relevant in today’s world?”

In 2007, in an effort to reflect the trends in healthcare, MMA expanded their membership criteria to include other professional health care disciplines. During the same time, MNA was having discussions on ways to expand MNA’s presence.

During this process, the leaders soon recognized the need for an entirely new organization, one with a multidisciplinary approach more in alignment with the current health delivery team approach. Early in 2008, at St. Louis, leadership from both organizations entered into preliminary discussions about this possibility.

In June of 2008, at the joint MMA/MNA convention in Colorado, a Study Team was formed with the mandate to exam the feasibility of a new organization. This team spent a year in dialogue and study. In June 2009, at the annual convention in Laurelville, Pennsylvania, the Study Team presented a proposal to the membership to create a new multidisciplinary organization for health care professions within the Anabaptist community. The vision of the Study Team was for this organization to have a global presence. The membership of MMA and MNA endorsed this proposal and recommended the formation of an Implementation Team with the mission to develop the structure for this new organization. Both organizations recognized that after the formation of a new organization, MMA and MNA as organizations would be dissolved.

The Implementation Team was formed in the final months of 2009. The members of this team spent 2010 and into 2011 intently and deliberately working out all the details involved in starting a new organization.

The Implementation Team began its work by refining the mission statement proposed by the Study Team, formulating a name for the new organization and developing a sense of what the organization would look like. The team then proceeded to develop the foundation and structure for the new organization. Three task forces were formed with team members co-chairing each task force. The members of the task forces came from various disciplines with a variety of expertise. Each task force was assigned two focus areas: Organizational Structure and Activities; Communication and Relationship with other Mennonite Organizations; Finance and Legal. The task forces submitted their work to the Implementation Team for input, coordination and synthesis.

In addition to developing the structure and foundation for Mennonite Healthcare Fellowship, the Implementation Team created a Steering Committee. This five-member committee was the first leadership team for MHF and provided direction and guidance as MHF was launched.

Mennonite Medical Association and Mennonite Nurses Association held a final Convention in June 2011, reflecting on the legacy of their two organizations and celebrating the birth of Mennonite Healthcare Fellowship. The Steering Committee became the Board of Directors for the new organization and met regularly over the summer during the search process for an Executive Director. The results of their search were announced in August 2011.

On September 1, 2011, Paul D. Leichty of Goshen, Indiana, began as the first Executive Director of Mennonite Healthcare Fellowship on a half-time basis. He established an office on the campus of Goshen College. A month later, Janelle Martin was hired as the half-time administrative assistant working from her home southeast of Goshen. 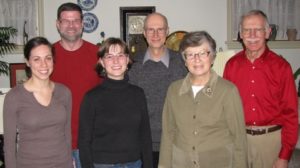 Members of the first Board of MHF: