It is a privilege and a blessing to be in a position to help those in need. In the Bible, Jesus tells his followers:

I recently had the privilege of helping people in need by participating in a medical mission trip to Nicaragua with International Service Learning. In response to the shortage of healthcare professionals in developing countries like Nicaragua, our team of six Americans, including two physicians and one dentist-provided healthcare services to two communities. This rich learning experience provided me with insights into cultural values that differ from my own. It enabled me to not only witness, but participate in, the creation of a healing environment.

Healthcare Needs of the People of Nicaragua

Although Nicaragua is the largest of the Central American countries, it is also one of the poorest in the Western Hemisphere. Almost one-half of its residents live below the poverty line. The average per capita income is equivalent to $2,720. Up to 40% of the population has little to no access to health services, and 78% of the individuals who are employed lack health insurance (Sequeira, et al., 2011). It was not surprising to read these statistics after visiting the country, as the families we served in San Isidro and San Sebastian lived modestly, with limited healthcare access.

Residents of Nicaragua experience a number of health issues due in part to their poverty. Child malnutrition is not uncommon, as one in five children suffers from this condition. Acute respiratory illnesses, mental illness, and infectious disease are also widespread, (Sequiera, et al., 2011), as well as chronic conditions of hypertension, diabetes, and arthritis (Emmerick, et al., 2015). As a medical missionary to the country, I observed residents who suffered from respiratory illnesses, rashes, parasites, and hypertension. Given that the majority of people in the two communities I visited had virtually no access to healthcare, my trip provided me with the ability to facilitate a healing environment for those who desperately needed it.

Our first team assignment was to knock on the doors of residents living in the small, rural community of San Isidro and offer a free medical examination. The people of the community were kind and respectful, yet some were initially hesitant to accept our offer. Others took advantage of the opportunity, recognizing that most healthcare providers were remote and inaccessible, and that few residents possessed means of transportation. In fact, given the dates on the prescriptions bottles that people had from previous visits, it was evident that they were unable to obtain refills for medications used to treat chronic conditions.

Our team provided basic medical care to community residents, which included vital signs, triage, and prescriptions. I observed a number of common health issues in San Isidro, including respiratory illnesses, rashes, hypertension, obesity, and the occasional colicky baby. As previously mentioned, most residents were unable to fill prescriptions due to lack of access to pharmacies and healthcare providers. This was disconcerting, as many of the prescriptions I viewed were written to treat chronic conditions and needed to be taken on a consistent basis. I realized that without traveling clinics like ours, many of these people would not receive life-sustaining medications. While it was rewarding to be able to provide them with the medication, I knew that after we left, access would once again vanish for a time.

In addition to medications and medical examinations, culture is an essential aspect to a healing environment. Culture encompasses the beliefs, values, and behaviors of a people group. No one can operate outside of culture. Thus, culture has a significant impact on healthcare. In the case of this Nicaraguan community, it was evident that cultural beliefs affected their approach to health. Nicaragua is a Christian country, with a majority of its citizens active in the Catholic Church. Prayer is emphasized as a central part of life. I observed prayer in the home as part of the healing process. People would frequently offer thanks to God for receiving medications from us, or a family member would pray aloud for healing. Another cultural aspect of health is home remedies. Many homes contain jars, resting on the floor or on shelves, filled with liquids and plants. One of the physicians on our team who had previously traveled to Nicaragua explained that herbal remedies for illnesses were common and valued. I realized that it was important to respect this prevalent cultural belief, even though I had never encountered it before.

After traveling to individual homes in San Isidro, our team temporarily settled in a small building in the town and provided a health clinic for several days. Just as with the home visits, the people who greeted us were warm and kind. They had faced much adversity in recent years. Several years back, a devastating flood leveled the town, and most residents lost all of their belongings. Not only did the flood take their material possessions, but it took away their sense of security and safety. A healing environment comprises more than just assistance for physical problems; it is important to address emotional and psychological needs as well. As the town’s residents received medical care and prescriptions, they simultaneously gained a sense of hope. Sometimes lending someone your ear, empathizing with their problems, and being truly present in the moment can promote healing.

After leaving San Isidro, we traveled to San Sebastian. At first glance, this town stood in stark contrast with the previous town in that it was a newly-built, middle class community. However, despite the appearance, the people faced health issues very similar to those in San Isidro. They had limited access to healthcare, as all clinics and healthcare providers were very far away. Over the course of three days, our team served over 60 individuals. Many suffered from respiratory illness, hypertension, and most notably, obesity. I observed that cultural issues once again played a role in our visit. For example, according to one of our physicians, the residents placed great value on receiving something–anything–when visiting a healthcare provider. If they do not receive a tangible good, they tend to believe that their care is inadequate. In the past, this issue has prevented some residents from seeking medical care at the free clinics offered by missionaries. Out of respect for this cultural belief, our team provided medications when necessary, and handed out vitamins if medication was not warranted.

In addition to medications and vitamins, education is a key element for holistic healthcare. Since obesity was a prevalent concern in both communities, education that stressed the need for a healthy diet and adequate physical activity was important. I realized very quickly that my knowledge about the types of foods preferred by Nicaraguans was deficient, and that I couldn’t effectively counsel them on how to prepare a healthy diet. Fortunately, both physicians on our team were familiar with local foods, and were able to offer insight into this issue.

One troubling issue with our ability to facilitate a healing environment was the lack of possible follow-up care. Although I believe we contributed to the health and wellness of the individuals we served, our time there was temporary. I knew that when we left, these people would again be in need of healthcare. Many town residents only receive healthcare when a traveling clinic comes to their town. This is particularly problematic for those with chronic health conditions that need regular monitoring and medication, such as those with hypertension. A healing environment is an ongoing endeavor, not one that ends when the client leaves the care provider’s presence. In order to best facilitate a continued healing environment for the people of these small Nicaraguan towns, clinics like ours must return on a regular basis.

My medical mission trip to Nicaragua gave me an opportunity to facilitate a healing environment within communities suffering from poverty and loss. In addition to serving these residents by providing medical examinations and prescriptions, our team offered a listening ear, a sincere heart, and a willingness to respect their cultural beliefs and practices. A healing environment is holistic, addressing physical, psychological, emotional, and spiritual needs. It was truly a privilege to create this type of environment among the people of San Isidro and San Sebastian, and one that I look forward to again. 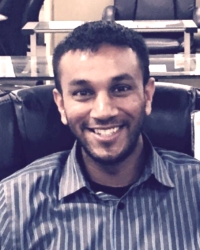 Milan Sheth is enrolled in the M.A. Biomedicine program at Eastern Mennonite University (EMU). He is pursuing a career in medicine and global health. Milan serves as an ambassador for an international health organization and advocates for students to gain experience in medically underserved areas. Milan aspires to be a physician and plans to apply to medical school after completing his degree at EMU.

For more information on the Essay Scholarship program and to read all of the essays currently posted, visit the Essays page.