I have always loved traveling–for the opportunities to learn about a new culture and for the relationships built. When the chance to participate in a two-month medical rotation in Eldoret, Kenya presented itself, I signed up immediately. The rotation took place at the Moi Teaching and Referral Hospital (MTRH) with which Indiana University has built a relationship and bidirectional exchange program over the past 30 years. It is one of the largest public referral hospitals in Kenya and serves a large catchment area. 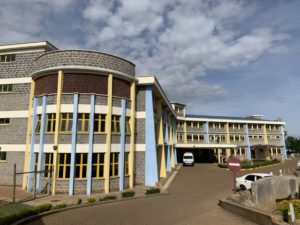 I split my time at MTRH between an adult ward and the pediatric hospital, spending about four weeks at each. Over the two-month period I built lasting relationships with patients and co-workers, honed my physical diagnostic skills, and both learned and taught medical knowledge through collaboration and patient care.

The entire experience was wonderful and overwhelming; it will change the way in which I interact with patients and the medical field moving forward. Rather than try to pull together all of my experiences into one cohesive piece, I will share a few patient stories that capture aspects of what I am bringing back home from this experience.
My first day on the wards at MTRH was with firm 3M – an all-male adult ward. We were admitting that day and I was excited to pick up a few new patients. Unsurprisingly, admitting patients is a bit different than what I was used to back home. When admitting a patient at IU, I am often able to look through their electronic health record (EHR) for past medical history and prior admissions and see what labs have been run in the ER before getting a thorough history from the patient. In Kenya, I met my patient with no knowledge of past medical history, labs, or imaging. When I walked into the crowded ER room, I was directed to the corner where my patient was sitting slumped over in his wheelchair and unresponsive. Per his family, he had been diagnosed with HIV nearly 20yrs ago and was often non-compliant with medications. Through thorough history taking, physical exam, and testing he was diagnosed with TB meningitis and started on the appropriate antibiotics.

Progress is slow when treating TB meningitis, especially with late presentation, so my patient spent four weeks on the wards. Over the month I grew close to his family who had been incredibly present during his hospitalization. Not only did they advocate for him, they made sure to turn him every two hours so that he did not get pressure ulcers and helped with physiotherapy when there was not sufficient staff. If it weren’t for their constant presence and dedication to his care, I do not think that he would have survived to be discharged home.

The amount of responsibility placed on the families of patients is incredible. They are responsible for their loved one getting medication at scheduled times, making sure they are fed, and for helping them use the restroom whether in bed or at the end of the hall. Quite frankly, the hospital would not run without them and patient care would suffer for it. It’s interesting to juxtapose the role of family in patient care here with that at home. I feel it is not infrequent that I hear staff complain about families “getting in the way” or “asking too many irrelevant questions” during rounds in the States whereas in Kenya they play an arguably vital role on the care team.

Though families do not need to be as tangibly involved in the actual providing of care back home, I think it is important to recognize their vital role and to involve them in the care plan where appropriate. I do not doubt that patients who have family advocates have better healthcare outcomes. The difference is simply more stark in a resource-poor setting.

There is a sense of community among the families at the hospital. If a patient is alone when the meal cart is wheeled in, someone else on the ward will invariably bring them a plate. A patient who was brought into the hospital by a “good Samaritan” was cared for by the mother of the patient next to him. The camaraderie and unspoken support among these individuals was a blessing to witness. I experienced a deep love in the small kindnesses done for one another that is rooted in the hospitality of the Kenyan people.

Another patient taught me the value of listening more than any patient I’ve met. He is a 7-year-old male who presented with an unclear history of abdominal pain, swelling, and profound jaundice as evidenced by the bright yellow color of the white of his eyes. On exam, it was found that he had moderate liver and spleen enlargement and labs showed that he was pancytopenic. Since he met criteria for acute ascending cholangitis, he was started on high dose antibiotics as we continued the workup for the etiology of his illness. What made the case more difficult was the language barrier. Neither he nor his mother spoke English or Swahili; they were from a Northern nomadic tribe and spoke Turkana. No one on our team spoke Turkana either, so we were stuck.

Our patient was still able to communicate aspects of his illness to us, however. As we undressed him for the physical exam, there were linear markings along his right and left flanks, across his epigastrium, and over his heart. These scars were the result of tribal ritual aimed toward healing his ailment before he presented to the hospital. I paid closer attention to the marked areas and listen to his heart long enough to catch additional beats – he was having premature ventricular contractions due to his potassium (an electrolyte) being far lower than normal. We were able to correct the imbalance and his exam improved. Though unable to converse with us, this seven-year-old patient told us vital information concerning his condition. I am a firm believer that patients know their illness best and if given the chance, will direct us toward better medical care.

Unfortunately, we still do not know what is wrong with the aforementioned patient. By the time I left, we were awaiting results from a bone marrow aspirate. The lesson he taught our team will be carried with each of us as we move forward in our practice, and I think serves as an important reminder to us all.

My time in Kenya flew by and I am grateful for every moment experienced and relationship made during that time. The community formed by those with loved ones in the hospital and advocacy on the part of patients’ families were incredible to witness, as were the little reminders to pay attention to each patient’s story. I will carry these moments with me as I move toward residency and am looking forward to the next time I am able to work in a global health setting.

Allison Hochstetler was a fourth-year medical student at Indiana University School of Medicine at the time of this writing. She is originally from Goshen, Indiana and is a 2015 graduate of Goshen College with a major in biochemistry and molecular biology and a minor in Spanish. Following graduation, she hopes to do a combined Internal Medicine and Pediatrics residency with the goal to practice hospital-based academic medicine as well as continue to participate in global health advocacy.