Theo Beels and his wife, Beth, returned earlier this year from three years of service at the Tansen Hospital in Nepal.  Following is an edited version of two letters he wrote to supporters.

Last week I was called to the Emergency Room (ER) to see Mina B. She is an 18 year old female who apparently came to our ER about three months ago because of rapidly progressive weakness in the legs. (The family lost the records.)  Since there was the distinct possibility that the weakness would progress to involve the rest of her body, she was referred to the nearest full service Intensive Care Unit (ICU), five hours away from us, so that she could receive ventilator support if needed.  The family did not follow that advice and took patient home instead.

About a month later she returned to our ER. (Her records were lost again, but one of our pastoral care workers remembered helping with referral.)  At this point she was paraplegic and incontinent and had serious bed sores that could not be managed by the surgeon who saw her. Pastoral care made arrangements for her to go to Kathmandu.

Instead, the parents took her home again for an additional six weeks before finally going to the hospital in Kathmandu where she was referred to earlier. On arrival there, they were told that she could not be admitted because of severe pneumonia. She was sent to yet another hospital in Kathmandu, where admission to the ICU was advised. The family decided that they could not afford ICU care and traveled back to Tansen where I saw them in the ER. Along with them was a bag of medicines and two units of unrefrigerated blood that they apparently had been asked to purchase by the Kathmandu hospital before admission.

At this point the patient was severely malnourished, short of breath because of a large pleural effusion with a severely collapsed lung, unable to move her legs and in pain because of the largest, most horrible looking bedsores that I have seen in my life. Deep in the cavities over both hips and sacrum, one sees the bone exposed to the outside world. One of our surgeons saw her with me in the ER and we both agreed that at this point nothing surgically could be done.

The family has no money and realistically Mina has only a very small chance to live for another year and virtually no chance to ever walk. So the following questions came up:

I broke the rules of rational thinking. All of us who saw her were overwhelmed by the misery of this 18 year old girl and her family. True, they did not follow “medical advice” but that was a result of financial concerns. She now lays in our isolation room, is getting morphine, intense nursing care for her wounds and we are trying to figure out what to do with her hemorrhagic pleural effusion, providing high protein feedings, emotional and prayer support. These are the patients for whom our hospital exists.

Could we have done things better? Yes, I believe so. If it had been clear from the beginning that the parents were not prepared to take her to the referral hospital, we should have admitted her right at the first visit. Unfortunately, patients and parents may say one thing and do another.

Thank you for your support!

Many of you have responded to the tragic case of Mina B, the 18 year old, paralyzed girl who presented with massive decubitus ulcers.  Against my better medical judgment, I admitted her. She required morphine for pain control and intense nursing care. When she became progressively short of breath, she required a chest tube to drain air and pus from her chest. She got nutritional supplements because of her severe malnutrition, antibiotics, and TB meds. Her decubitus ulcers got worse and her hip bone started sticking far out of her wound as there was nothing to keep it in place.  While on antibiotics she developed an abscess on her arm that required drainage by surgery. Ultimately she developed a pneumonia that did not respond to medication.

We discussed her situation with the family and gave them the option of taking her home. This is a common practice in Nepal as it is much cheaper to transport a live human being than a dead body. The family chose to leave her with us as, understandably, they felt that they could not care for her at home.

She died the next day.

During the several weeks that she stayed with us she was followed by our pastoral care team who supported her and prayed with her. During this time she confessed Jesus as her Lord and Savior and the head of our pastoral care department conducted a Christian funeral for her with full cooperation of her parents.

So, in retrospect, I am thankful that we had room to care for her. Although she departed early from this life, she did inherit eternal life. Thank you, Lord, and pastoral care! 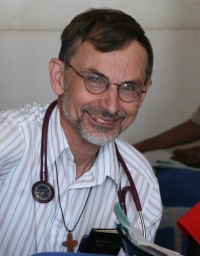 Theo Beels, M.D. is originally from the Netherlands where he did his medical school and family practice residency.  He also did a rotating internship in Regina, Saskatchewan, and then in 1977 was sent for three years by Mennonite Central Committee to work for United Mission to Nepal. While in Nepal, he met his wife, Beth, and they were married.  Since then, he has practiced in a variety of settings first in Kentucky and then in Grand Rapids, Michigan.  He and Beth returned to Nepal in January of 2010 and served for three years with Interserve in United Mission Hospital Tansen and Tansen Nursing School, respectively.  Since returning to Grand Rapids, he works part time in a rehab unit of a nursing school in Grand Rapids.