What’s in a Name?

Most of us are satisfied with the name we were given.  However, I heard of a man who went to the trouble to change his name from Joe Pajaczkowski to Frank Pajaczkowski.  When asked why, he replied, “I was getting tired of having people say, ‘What do you know, Joe?’”

For most of us, our name is very important, linked as it is to our identity and often our history or heritage.  It is easy to take personally, or sometimes dislike, comments or attitudes which appear to demean our good name.

Speaking personally, I haven’t been tempted to change my name to Frank, even though I’ve also been greeted from time to time as was Mr. Pajaczkowski. I will admit, however, that I have wondered why someone with no particular distinguishing features is described as “an ordinary Joe,” or why a common, not very healthy, and messy food had to be named Sloppy Joe!

Usually our name is what we make of it.  The name of an individual (or a family) can evoke either positive or negative images depending upon the perceptions we have gained over time.  The same is true for organizations and institutions, especially if we have the opportunity to interact with them or their members in significant ways.  But what about a new organization?  What meaning does its name have when we haven’t had the opportunity for interaction?

After considering and discussing a variety of alternatives, the group charged with overseeing the formation of Mennonite Healthcare Fellowship (the Implementation Team) suggested that name to the parent organizations in 2011. There were reasons why the three words were chosen over other alternatives, reasons which relate to our purpose as well as our image.  Let me share some of them with you.

Mennonite.  The primary alternative considered for the first word was “Anabaptist.”  In some sense, that term would have more accurately defined our constituency as including a number of denominations with generally common beliefs, whether or not the name “Mennonite” is part of their denominational title. However, Mennonite was selected in part because a person who had done medical service in Africa noted that the word “Mennonite” was clearly linked to a set of beliefs and behaviors reflecting our basic theology.  Mennonite did not carry the uncertainty or lack of understanding that the use of the theological term “Anabaptism” might engender.

Healthcare.  The initial choice for the second word was “Medical,” a natural consideration in view of our predecessors, Mennonite Nurses Association (MNA) and Mennonite Medical Association (MMA).  But the Team felt that Medical was too limiting, for many persons linked only to nurses and physicians.  “Healthcare” was thought to be a better term, obviously including the vocations traditionally associated with medicine, but much more inclusive of the broad variety of activities related to health. Healthcare can refer to treatment or prevention, can apply to an individual or a group, and can involve systems and organizations concerned with all aspects of health.

Fellowship.  The third word chosen was also thought to be the best descriptor of the goals and activities envisioned for the MHF.  Rather than the more formal or business-like terms “Association” or “Organization,” “Fellowship” was selected, reflecting a desire to continue the kind of interpersonal and family-oriented relationships valued by members of the MNA and MMA.

Annual Gathering.  We have attempted to send a similar message in using the name “Annual Gathering,” rather than “Meeting” or “Convention,” for our yearly time together.  While there will certainly be speeches and workshops, we want to emphasize the other aspects of that time, including worship, personal interactions, and dialogue.

There are additional words, not part of the formal title, which might be used in association with Mennonite Healthcare Fellowship, including “active,” “relevant,” and “growing.”  (There are other less positive words which I have chosen not to list!)  Whether or not those words will be linked to MHF will, in large part, depend on our members.  As members support, promote, and in other ways contribute to the organization, the organization, in turn, has the potential to contribute significantly to our members as they attempt to incorporate their faith into their vocation.

Mennonite Healthcare Fellowship:  Will you lend your good name to its mission and vision? 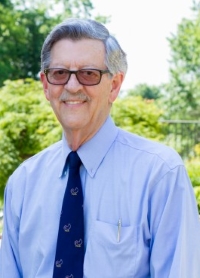 Joe Longacher, MD, is a past President of Mennonite Healthcare Fellowship and lives in Harrisonburg, Virginia.  He retired at the end of 2012 from a practice in gastroenterology in Richmond, Virginia and was part of the Implementation Team that gave leadership to the formation of MHF.  Joe has also served at the conference and denominational level and was a past president of Mennonite Medical Association (MMA).   He is married to Constance (Brenneman), originally from Hesston, Kansas, and they have four children and six grandchildren.

Journal > What’s in a Name?