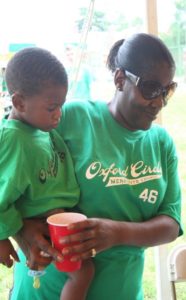 Pauline knew of Oxford Circle Mennonite Church for many years as the church down the street where she sent her girls to Bible School. Although she visited the church occasionally, she didn’t get connected until she volunteered at the congregation’s first community festival in 2002. Her involvement grew as the Oxford Circle Christian Community Development Association was born. When the Association began year-round after-school and summer programming in the low-income housing project where she lived, Pauline became one of the most consistent volunteers.

A cancer survivor, Pauline’s medical condition had led to a permanent disability designation. However, a few years ago, Pauline shared that her experiences volunteering had given her confidence that she is physically able to work again. She stepped into a temporary job, followed by permanent employment in a daycare center. She recently moved from the low-income housing project. Recently, Pauline helped from start to finish at the thirteenth annual community festival. She has helped teach Sunday school, served on a prayer team, and is truly one of the oaks of righteousness that God is using to rebuild the neighborhood.

Warren (not his real name) was sent to Esperanza Health Center about eight years ago with a new diagnosis of advanced AIDS, including a nearly non-existent immune system. He arrived despairing of life, hopeless for his future. In the first few months, he was in and out of psychiatric hospitals. He called, suicidal, on multiple occasions. There was concern that he was going to be too emotionally unstable to successfully treat his HIV medically.

The staff at Esperanza continued to pour prayer and time into building a relationship with Warren, and eventually he settled into a consistent pattern of medical visits. Still, what became the turning point in Warren’s journey was when he followed through on our staff’s encouragement to connect to a local church. Through the ministry of that congregation, the faith of Warren’s youth was re-kindled into a renewed decision to rely on Christ and walk in discipleship in a faith community.

Even though he continues to have ups and downs in his battles with sexual addiction and compulsive overeating, Warren has experienced tremendous growth and healing. His HIV disease is stable on medications, with an undetectable viral load for years, and with a near normal immune system. His depression is controlled. He has remained part of a neighborhood church, attended by other members of our Esperanza staff, experiencing life beyond what any of us dared imagine. 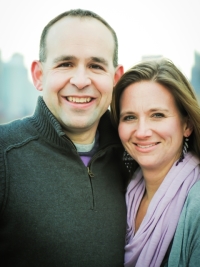 Tim and Jen Leaman live in Philadelphia, Pennsylvania.  Tim works at Esperanza Health Center as a family physician and the site medical director of EHC’s Kensington office.  Jen volunteers regularly in their children’s neighborhood public school and serves on the board of the Oxford Circle Christian Community Development Association.  Tim and Jen attend Oxford Circle Mennonite Church where Jen helps to lead worship and Tim provides leadership to the prayer ministry.  Tim and Jen have three children:  Isaiah (10), Josiah (7) and Ana (5).  They enjoy taking walks in their Oxford Circle neighborhood, finding new ethnic restaurants, gardening and hanging out with neighbors and friends.