All Things are Connected

If you turn to any news reporting source in recent weeks, you are likely to find an update on the latest viral activity of the Ebola virus, a discussion on California’s acute water shortage, or an investigation on various acts of violence near and far. The headlines blur together into that of which Wendell Berry suggests Nature continues to convince us–that “all things are connected; the context of everything is everything else.” (Berry, 2009)

As Anabaptists, we might respond by echoing the standards that Doris Janzen Longacre offers in the introduction to a denominational favorite, Living More with Less: “Do Justice. Cherish the natural order. Nurture people.” (Longacre, 2010)

Though it is less clear how we ought to respond as healthcare professionals, Colin Butler, an Australian global environmental/public health scholar, suggests that “doctors have a duty of care to think ahead, to think in a precautionary manner, and to sound warnings in the interest of their patient, whether an individual, a population, or the whole planet.” (Butler, 2014) Just a month ago, in collaboration with over 55 international experts, Butler published a compilation of scholarly resources on Climate Change and Global Health, addressing health concerns of populations vulnerable to climate change in their unique economic, political, and environmental contexts.

Butler and his colleagues discuss region-specific challenges, political realities, the use of resources, and the specific perspectives from various health disciplines. Yet they also empower readers with a practical discussion on actions for reform.

Another contribution to the topic of climate change comes from Ellen Davis, an Old Testament scholar at Duke Divinity School. She explains that “agrarianism is a way of thinking and ordering life in community that is based on the health of the land and of living creatures.” She goes on to suggest the “logically perplexing but morally empowering paradox that the Bible is both grossly irrelevant in direct application to current economic problems and incredibly relevant in vision and principle for grasping opportunities and obligations to make the whole earth and its bounty serve the welfare of the whole human family.”(Davis, 2008)

An invitation. Whether you’re serving in a rural or urban location, in North America or abroad, I invite you into the conversation. These are just a few of the voices speaking to current realities as well as God’s intent and vision for the world. I invite you to think about our role as Anabaptist healthcare professionals in responding to the way that climate change is affecting human health.

As Mennonites prepare to gather next summer from across the globe around the theme “Walking with God,” let us acknowledge that as journeying disciples we have not yet reached the goal. Our coming together in Harrisburg will provide members of Mennonite Healthcare Fellowship some unique opportunities to engage in the topic of climate change and human health. 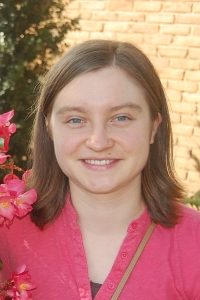 Lyubov Slashcheva, DDS graduated in 2016 from Virginia Commonwealth University (VCU) School of Dentistry in Richmond, Virginia. After completing her undergraduate studies at Eastern Mennonite University in 2011, she interned with the Luke Society in Honduras and Peru for four months in a public health service role. She was a National Health Service Corps Scholar and has engaged in research and service opportunities pertaining to Latino, geriatric and special needs populations. She has received numerous honors for her research and service endeavors and during her student years held leadership positions on the VCU campus, including the Christian Medical and Dental Associations chapter.  In the spring of 2016, she moved to Iowa City, Iowa where she is in residency and doing postgraduate training in dental public health.  She has also been active in leading worship/ music/ children’s education in her local congregation, and is a committed cyclist for commuting.  She enjoys playing the flute, reading, and learning about different cultures.  She anticipates four years of public health practice in an underserved setting following her studies.

Annual Gathering > All Things are Connected