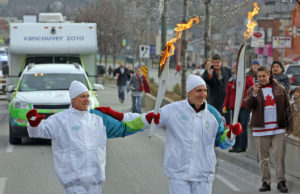 The Olympic Torch. Bombardier, an airline manufacturing company, was the proud designer and manufacturer of the Vancouver Olympic torch. The sleek white light saber was proudly carried by 12,000 torchbearers as it made its way from Olympia to the grand Olympic cauldron in Vancouver.

One of the Olympic torchbearers writes, “When my turn came to be handed the Olympic Torch, for half a second I pictured its entire story, from the forge to my hands, like a magic wand… Everyone wanted to touch and hold the torch, at one point there were so many hands on the torch and it was so beautiful!  So moving!”

And then about passing the flame, “Together with the Olympic flame, John passed on to me his energy and his enthusiasm with such strength that I literally started to jump! I started to run holding the torch as high as I could. I [could] not put my hand down for a second…”

To be sure, it was incredibly exciting to carry the torch. But it was a profound privilege to pass it on, to be a part of the procession.

Among the poor, the “athletes” are people with vision and talent who are able to move their family or their community forward. They are involved in a transformational process. The community looks to them for leadership. They understand the social dynamics in their communities and know what will work and what won’t.

Torchbearers, on the other hand, might only be part of the show for a brief moment. But they hold the communities they visit in high esteem and feel privileged to have an opportunity to be involved. Bearing the torch draws attention to the good things that the athletes are accomplishing.

The crowds are linked to the impoverished community by the torchbearers. They are attracted to the message, and through the torchbearer’s activity they have an opportunity to participate, supporting the athlete’s actions with their cheers.

When I move among the poor I see many athletes. Unlike the Olympics, their cheering crowd is small. Maybe it’s only a friend. Perhaps it’s a few neighbors, maybe even a small village benefiting from the accomplishments of the athlete.

At International Mennonite Health Association (IMHA) we are looking for torchbearers. We need people who can help us make this link. We want to know more about the athletes, but we won’t know unless someone bring us the news.

Have you travelled to or worked in a poor, underserved community overseas? Have you seen inspiration and initiative? If you know athletes in these communities, consider joining IMHA. Help us honor them.

At IMHA we want to hear stories about these people. We want to post their stories so the cheering crowds can be a part of something bigger. Help us to be torchbearers.

To learn more about the work of International Mennonite Health Association, visit their website at www.intermenno.net where further contact information is provided. 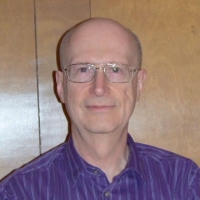 Paul D. Leichty, M.Div. is Executive Director of Mennonite Healthcare Fellowship (MHF).  Paul has served as a pastor, church musician, computer support person, disabilities advocate, and administrator/organizer of a number of church-related ministries. In addition to responsibilities at MHF, Paul is Executive Director of Congregational Accessibility Network and Director of User Services at Mennonite.net.  He is also active in music at Berkey Avenue Mennonite Fellowship in Goshen, Indiana where he lives with his wife, Twila Charles Leichty.