Dr. Bwire Chirangi is the medical officer-in-charge at Shirati KMT Hospital, Shirati, Tanzania. He is the son of the late Mtaragara Chirangi, an early leader in the Tanzanian Mennonite Church. Dr. Chirangi lives with his wife Violeth, daughter Brielle and two newborn twin boys who joined the family on April 8, 2015. 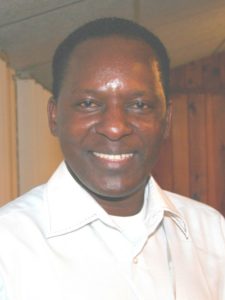 Dr. Chirangi holds Masters Degrees in Science and Public Health. He pursues his passion for reducing maternal death through community health education and prevention as well as a passion for institutional capacity building through his current position at Shirati Hospital. Outside of the office, he enjoys playing soccer.

Answering the call of a short-staffed Mugumu Hospital, Dr. Chirangi began his professional life in healthcare when he accepted a vacant Clinical Officer position in 1995. After continuing on staff at Mugumu Hospital, Dr. Chirangi returned to school to become an Assistant Medical Officer (AMO). Upon completing his AMO studies, he returned to Shirati, where he remained for several years before traveling to Holland to pursue a Masters in Public Health.

While holding his position of MOC at Shirati Hospital, Dr. Chirangi has been active in engaging outside individuals in his quest for accessible healthcare. He is the founder and facilitator of a program with Maastricht University of the Netherlands that allows senior medical students to travel to Shirati and work in the hospital. Dr. Chirangi also volunteers as a Clinical Instructor in the Department of Reproductive Medicine at the University of California, San Diego.

At the Mennonite Healthcare Fellowship (MHF) Annual Gathering in Harrisburg, Dr. Chirangi will present a workshop sharing the results of a recent study completed within the “Saving Mothers Project.” Working alongside Gail C. Webber, Dr. Chirangi conducted the study and co-authored the article, “Women’s Health in Women’s Hands: Pilot Study Assessing the Feasibility of Providing Women with Medications to Reduce Postpartum Hemorrhage and Sepsis in Rural Tanzania.” The full article is available on PubMed and is accessible through the following link: http://www.ncbi.nlm.nih.gov/pubmed/24786175.