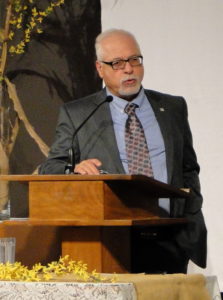 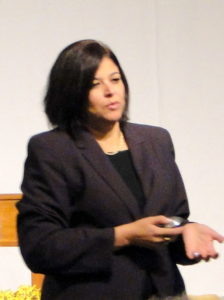 Leaders of the oldest hospital in Israel were featured in an informational public presentation on Monday, October 19, 2015 at Berkey Avenue Mennonite Fellowship in Goshen, Indiana.  Dr. Bishara Bisharat, Head of Nazareth Hospital EMMS, and Ms. Samar Mansour-Samawi, Director of Public Relations, were the special guests at the evening meeting sponsored by Mennonite Healthcare Fellowship and Mennonite Mission Network.

Dr. Bisharat and his associate were on a speaking tour primarily in the greater Chicago area under the co-sponsorship of two American organizations.  Abraham’s Children, a mission of the First Presbyterian Church of Wheaton, Illinois, supports the minority citizens in the Holy Land.  The Nazareth Project, Inc. (NPI) is an organization based in Lancaster, Pennsylvania, which supports health care and health education services in the Galilee region of Israel as carried out by Nazareth Hospital and Nazareth School of Nursing.  NPI also supports related ministries such as Nazareth Village. 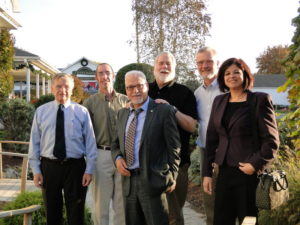 Under the slogan “Healing in His Name” the Nazareth visitors were accompanied by Greg and Susan Drinan of Abraham’s Children.  John F. Lapp from Mennonite Mission Network hosted the group during the day which included a presentation by the visitors at the Mennonite Offices and a tour of Menno-Hof in nearby Shipshewana.  Menno-Hof is an Amish/ Mennonite interpretation center which provided some of the inspiration and ideas for the Nazareth Village project.

At the evening meeting, after a welcome and introductions by Paul Leichty, Executive Director of MHF and John Lapp from Mennonite Mission Network, Jason Allgire from NPI gave a brief overview of the setting and Christian witness of the various ministries in Nazareth and how NPI supports their work from its base in the United States.

Dr. Bisharat set the backdrop for the medical work by noting the presence of Arab Christians in the Middle East since the Day of Pentecost, including at least two known Arab tribes before Islam came on the scene.  Today, about 12 million Arab Christians are scattered throughout the Middle East with about 130,000 residing within the borders of the modern State of Israel and over 24,000 of those clustered around Nazareth, now a metropolis with over 210,000 residents.

Nazareth Hospital itself was founded in 1861 by the Edinburgh Medical Missionary Society (EMMS), a Scottish Presbyterian organization.  That makes it the oldest hospital and medical center in the modern State of Israel. It is one of three private hospitals (all of them Christian) which serve over 300,000 people in the Galilee region.

Today, this modern general hospital employs over 530 staff, has 147 beds, and operates within the framework of the Israeli Healthcare System. Care covers the normal spectrum of general hospital services, as well as providing the only Arabic-language psychiatric unit in Israel, a specialist outpatient unit for tuberculosis patients, and an emergency room which handles over 50,000 visits per year. Nazareth EMMS is also a teaching hospital for doctors and an important nursing school, the only one serving the Christian and Arab community. Unlike state-run facilities, private hospitals in Israel receive no funding for care not covered by insurance, including any new initiatives, chaplaincy services, or capital improvements. Nazareth Hospital relies on outside private support for all these needs.

The hospital serves every religious group in the community, but makes a special effort to address the public health needs of the minority Arab population, both Christian and Muslim.  Signage in and around the hospital is in Arabic, English, and Hebrew, reflecting the diversity of patients and staff.  An extensive community outreach program addresses the particular health needs of the minority community focusing particularly on diabetes and obesity.  As a part of that effort, healthy food is served within the hospital and a “Whole Wheat Bread Festival” was recently held.  Nazareth Hospital EMMS is recognized as a Health Promoting Hospital by the World Health Organization initiated International Network of Health Promoting Hospitals & Health Services (HPH).

The community in turn is very supportive in helping the hospital with special fundraising efforts for projects not covered under the Israeli health system.  Particularly inspiring was a story of how a group of school children jump-started a campaign to purchase a heart catheterization lab unit.  These efforts reach all the way to the U.S. as well where NPI assists by requesting aid grants by the U.S. government.

In 2011, the hospital celebrated its 150th anniversary reaffirming its values of (1) Love and Compassion, (2) Human Dignity, (3) Excellence and Professionalism, and (4) Outstanding Services.

The Nazareth Project in the U.S. began in the early 1950s when American relief workers to Palestine were moved to involve their home church congregation in providing heaters and blankets to Nazareth Hospital.  In the late 1960s, Mennonites became involved, most notably through medical mission workers, Robert and Nancy Martin (members of Mennonite Healthcare Fellowship).  In the 1980s, the Martins returned to Nazareth. Nancy Martin, EdD, took the post of director for the nursing school, and Robert Martin, MD, served as general director of the hospital. They served a total of eighteen years in Nazareth.

The Martins inspired a growing movement of American friends of Nazareth Hospital who in turn provided structure to relief efforts and founded the Nazareth Project International (NPI) based in Lancaster, Pennsylvania in the early 1990s.  NPI is a U.S. non-profit organization dedicated to supporting a unique blend of ministry and medicine as carried out by Nazareth Hospital and School of Nursing.

In the U.S., NPI raises funds for equipment, capital improvements, nursing scholarships, continuing education, and spiritual development.  NPI also recruits volunteers for SERVE Nazareth, a program that offers participation in a variety of ministerial projects on-site. These efforts help raise awareness of the critical issues in this troubled region, through connecting people to people, sharing stories, and reaching out to many churches and community groups in the U.S.  At the Goshen meeting were a number of persons who had served in short-term assignments in Nazareth.

Also during the evening presentation, Susan Drinan explained about the work of Abraham’s Children.  The Wheaton, Illinois based organization focuses its activities and fundraising on educating American Christians on peace and justice issues relating to fellow Christians in the Holy Land.  They also support the work of Nazareth Academic Institute (NAI), a Christian-inspired, fully accredited college founded in 2006 which provides a liberal arts education and also special studies in peacemaking. Under a developing partnership, new NAI nursing students will take their clinical training at Nazareth Hospital.

Greg Drinan shared about an exciting project organized by Abraham’s Children which will directly affect Nazareth Hospital.  Through the Hospital Sisters Mission Outreach (HSMO), used but still usable medical equipment that is being discarded in the United States is prepared and shipped all over the world to medical facilities that can still use it.  Since 2002, 9 million pounds of surplus medical equipment and supplies have been sent to over 350 locations around the world.  The estimated value is over $50 million.  If those supplies had not been rescued, they would have ended up in American landfills.

In partnership with HSMO, Abraham’s Children has sent a number of ocean containers of equipment to Holy Family Hospital of Nazareth. Their next project is to raise funds for a 40-foot ocean container for Nazareth Hospital. Abraham’s Children has a matching grant of up to $10,000 for what they manage to raise for shipping costs. For persons wishing to support this effort, checks can be directed to First Presbyterian Church of Wheaton with “Abraham’s Children” written in the memo and sent to 715 N Carlton St, Wheaton, IL 60187. In their letter of thanks/receipt they will be listing Nazareth Project Inc. as their partner in this endeavor. 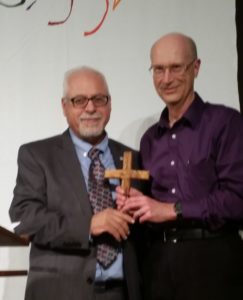 To conclude the evening and in recognition of Mennonite involvement and contribution to the ministry in Nazareth, Dr. Bisharat presented a carved wooden cross from Jerusalem to Mennonite Healthcare Fellowship Executive Director, Paul Leichty.

All of the organizations involved had additional literature available after the presentation.  Still more information is available on the following websites: