Thanks to a Student Elective Term scholarship through Mennonite Healthcare Fellowship (MHF), I joined six other Indiana University (IU) medical students in a month-long rotation in El Salvador. IU’s ENLACE program partnered with Companion Community Development Alternatives (CoCoDA) to create an intensive immersion Spanish language study that provided onsite exposure to primary and community health care in a developing country. CoCoDA is a nonprofit organization whose mission is to support community, social, and economic development and social justice in Central America. They graciously provided all of the in-country coordination of our orientation, travel, and schedules, and connected us to CRC (Comité de Reconstrucción) which organized our clinical sites and host families. It is thanks to MHF, CoCoDA, CRC, and IU that I was able to spend the month of April expanding my understanding of global health and improving my Spanish. 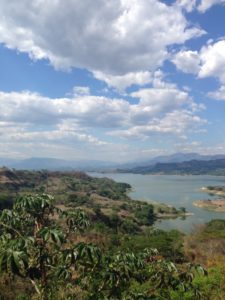 I was first introduced to the richness of Latin American culture during my study abroad program at Goshen College, when I lived in Lima, Peru for 3 months. This was followed by many trips, vacations, and medical electives in Bolivia, Costa Rica, Ecuador and now El Salvador. Each experience has fostered in me a sense of adventure and an appreciation for unique cultural traditions in these settings.  I came away from these experiences wanting to hear more of the stories from the men and women I have met.

It is very humbling to step out of one’s comfort zone. While I don’t know exactly how this will shape my career, I believed that this elective in my final year of medical school would help remind me of how inherent cultural sensitivity, communication, and compassion are to practicing medicine well. 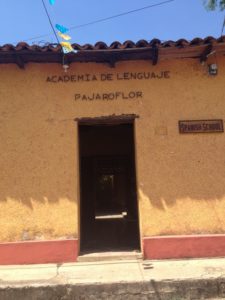 We spent our first days in the capital of San Salvador where we learned about the culture, language, and history of El Salvador. There was a special focus on the recent civil war (which took place from 1980-1992, and the tremendous impact this had throughout the whole country. After orientation, we traveled to La Mora, a small rural community located six kilometers from the town of Suchitoto, where many of our clinical rotations would take place. Suchitoto is actually a large municipality that is an hour and a half drive from the capital.

Each student was placed with a host family, while other members of the La Mora community helped us by doing laundry and cooking safe, delicious meals. In the mornings we had clinical duties (a different site every week), and every afternoon we had small group Spanish classes at Pájaro Flor, a wonderful language school in Suchitoto. There were also a few mornings of free time to complete classroom assignments, explore Suchitoto, and plan weekend excursions.

The first week I spent my time at the La Mora Health Clinic, a primary care clinic which was started by the CRC. Squeezed into tiny exam rooms without fans, we sweated profusely in the hot April heat, caring for patients of all ages with all types of conditions.

Next, I spent a week at one of the government-run primary care clinics in Suchitoto.  Each morning there were so many patients that the line went out the door, spilling into the street. Services were limited because of cost and resources. For example, a patient would be referred to the public hospital for a basic urinalysis because the clinic could only do urine dips.

One day that week I went out into the neighborhoods with a team to help prevent the spread of mosquito-borne diseases. We went from door to door, searching for mosquito larvae, emptying/cleaning water supplies, and fumigating houses of those patients who had been seen at a clinic or hospital for fever and were suspected to have dengue or chikinguna.

Another week I worked at the public hospital. This held a variety of activities, including traditional medicine rounds, surgeries, OB/GYN visits, pediatric consults, and routine adult outpatient visits for patients with complicated medical histories or uncontrolled hypertension/diabetes that the community clinics could not treat. While mainly devoted to seeing patients and helping the physicians by doing physical exams while they hand-wrote prescriptions or lab requests, there was also time for the physicians to provide us with medical education.

The feeling of panic still lingers as I think about how I felt when my attending physician asked me for a differential diagnosis and treatment plan or to explain the stages of chronic kidney disease, all in Spanish.  Those feelings are mixed with the excitement of identifying the rash of chikinguna for the first time or completing a medical history on my own in Spanish.

In addition to these clinical sites, students spent a week with the midwives, where we did prenatal visits at patients’ homes out in the countryside. One moment in particular stands out–when there were two medical students, one midwife, one community liaison, one pregnant woman, one large turkey, one scrawny dog, two ducks, and a hen and some of her baby chicks, all in one bedroom, which was our makeshift exam room. The patient and midwife were unfazed by the extra company and continued their conversation comfortably.

What I appreciated about this interaction was how no one was distracted by the animals or the heat. (April is one of the hottest months of the year.) Rather, the midwife was patiently advising the soon-to-be mother about the symptoms she would experience when labor started and the importance of breastfeeding her newborn. This patient received the counseling and care she needed, even though she was an arms length away from a miniature farm in her own bedroom!

While it was frustrating to work in a system that doesn’t have enough medicines, doesn’t have enough doctors or nurses, or enough beds in the hospital, I was encouraged to find hardworking, kind providers in El Salvador similar to those I’ve worked with in the United States. Kindness and patience are resources that are abundant here in La Mora and Suchitoto, no matter how limited their other resources are.

The clinical aspects of this elective were a highlight of medical school, without a doubt. But what I appreciated most was the opportunity to improve my Spanish so that I can communicate better with my patients who are Spanish-speakers and to become more culturally sensitive. My understanding of global health, while not radically different than before, has a greater depth and a firmer foundation thanks to this experience. 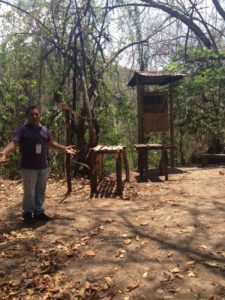 There is still so much work to be done in order to provide equality in healthcare for people around the world.  This means not just improving access to services, or access to certain medicines and therapies, but also supporting efforts to eliminate discrimination, to empower women and eliminate domestic violence in communities, and to protect children from malnutrition and provide them with educational opportunities. My experience in Suchitoto has been a reminder that global health is more than just the physical health of one’s body, but also the emotional, spiritual, and mental health of a community in the many places around the world that people call home.  (Picture at right:  Luis, one of our guides, teaches us about the guerrilla encampments. Pictured is the table they would use for surgery during the war.)

Because of my time spent living and working in El Salvador, I also have a renewed respect and appreciation for living simply. The Salvadoran attitude of humility and thankfulness for what they have is something I hope to carry with me and share with others, in and out of the hospital. The hope they offer themselves and foreigners like me is a nothing short of a miracle after so recently experiencing such a gruesome war.

I was welcomed to El Salvador with open arms and ushered into a world where the greatest value in a person’s life lies in relationships, not material possessions. The courage and determination that these people exhibit is extraordinary. I’m so thankful that they were willing to share their stories with me; because of them, not only did I learn Spanish, but I gained a second family and another place to call home. 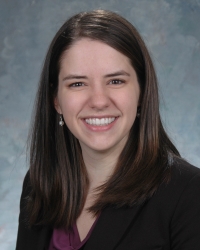 Elizabeth Nafziger, MD, is originally from Goshen, Indiana. She graduated from Indiana University School of Medicine in May of 2015 and is currently living in Ann Arbor, Michigan, where she has started her first year of residency at the University of Michigan, where she will spend the next four years training to be a neurologist. She carried out her Student Elective Term in several settings under the ENLACE Global Health Elective in El Salvador in the spring of 2015.