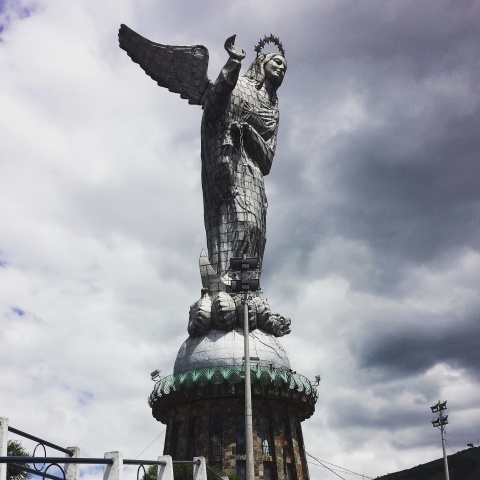 Visiting the Madonna statue on top of El Panecillo in Quito

With the help of a scholarship from Mennonite Healthcare Fellowship, I spent my Student Elective Term (SET) in Quito, Ecuador during the month of April 2016. The trip was organized through Child Family Health International (CFHI), an international NGO based in San Francisco.  When looking for Global Health immersion programs, CFHI impressed me with its dedication to maintaining cultural authenticity and its local family homestay living experience. I also valued its focus on creating sustainable healthcare infrastructures through its ongoing partnerships as opposed to the glorified “medical tourism” that poorly organized programs often provide.

Ecuador is a South American country with a population of nearly 16 million. Roughly two-thirds of Ecuadorians live in urban areas and one-third in rural areas. Their annual GDP is around 100 billion USD, and robust healthcare systems exist in both the public and private sector.

During the month I spent in Ecuador, I had firsthand exposure in both sectors. I learned much about the fragmentation in Ecuador’s overall approach to healthcare and discovered that this lack of unity can lead to “tiered” levels of care. In general, I found Ecuador’s health metrics to be above average when compared to similar countries. It is worth noting, though, that the divide between urban and rural healthcare is stark. Health correlates highly with economic status. Indigenous and Afro-Ecuadorian citizens (who live mainly in more rural areas) have worse overall health outcomes, including a malnutrition rate that is almost double that of urban areas.

Geography plays a surprisingly large role in Ecuadorian health. The country is roughly divided into three distinct regions: Amazon, Highland/Sierra, and Pacific Coast. As a result of the different microclimates in the country, each distinct region has specific diseases and infections associated with its unique landscape. 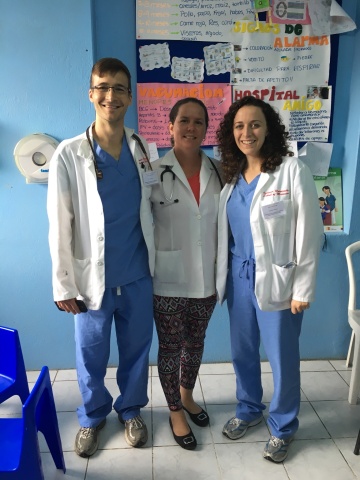 Working with a Cuban pediatrician in the rural hospital of Nanegalito

I was only able to directly observe Highland region healthcare, so the bulk of my observations from within this context. However, I did experience the indirect effects of the other ecosystems. For example, I was originally scheduled to spend two weeks in the rural village of Chone, a city in the Coastal region, but was informed upon my arrival that the planned Chone portion of studies had been dropped from the international student curriculum due to concerns over infectious diseases such as Zika virus (which apparently is not a concern in the highlands around Quito). I also learned that malaria and yellow fever are only endemic to the Coastal and Amazon areas due to their lower altitude and more humid climate, and I was surprised to find that many doctors in urban Quito were nearly as unfamiliar with treating tropical infectious diseases as their American colleagues!

Going into this experience, I tried to be cognizant of my preconceived notions, but I still found myself frequently surprised by the differences between medical education system in Ecuador and the United States. For example, I learned that doctors in Ecuador often have little choice of what specialty they will pursue. In what seems to be a byproduct of Ecuador’s need-based system, there are not enough residency positions for the number of graduating medical students each year. Students in Ecuador go to both public and private medical schools – beginning a seven-year medical curriculum directly after high school. However, there is not really an Ecuadorian residency “match” for final-year students. Instead, students complete an “intern year” at their respective schools (a year that resembles our first year of medical residency, but encompasses all specialties over the course of the year) and then decide to which residency programs they will directly apply. This often includes international programs, which are viewed almost universally as more prestigious than Ecuadorian training. (This is immediately evident when glancing through local medical provider directories; the country a doctor completed training in is listed immediately after his/her specialty!) However, for the average Ecuadorian medical student, an international training program is simply not feasible. The majority of students must instead wait and see what specific programs in Ecuador will have open training spots in the upcoming year. For example, if there are no surgical positions offered, an aspiring surgeon may need to switch their focus of study to family medicine or obstetrics, as these specialties are generally in higher public demand.

In the time I spent at the public social security clinics (called IESS), I saw some rough similarities to the Veterans Affairs (VA) hospitals in the U.S. In a similar fashion to VA clinics, the IESS had a large list of drugs on the “IESS formulary” that were prescribed and dispensed to patients, but beyond this, the differences between the two systems became apparent. If a patient needed a drug that was off-list or out of stock, the doctor wrote a prescription for the patient to buy the medication out-of-pocket at a private pharmacy. These prescriptions were written on blank pieces of paper, and could be easily forged; additionally, they were not even legally required for many prescriptions. Furthermore, many doctors told me they preferred the quality of foreign drugs, and specifically wrote foreign drug prescriptions for private and/or wealthy patients. They said the public IESS system bargained directly with pharmaceuticals for system-wide contracts, and for this reason often went with the lowest bidder and not the best drug. They also lamented the tariffs and taxes that have throttled the import of American drugs, which they perceived as more potent and made under much stricter quality standards than the national pharmaceuticals.

Another interesting wrinkle in the public healthcare system was in regards to patient scheduling. Patients were not really given any options for outpatient appointments. At the end of the visit, the doctors told them exactly at what time and on what date they would be seen for follow-up, and there was no pushback (as this is accepted by patients as standard practice). This was in line with my limited observations, which seemed to suggest that patients in Ecuador are more appreciative of the medical care they receive and are more respectful of their doctor’s time than their American counterparts. I fully realize that my viewpoint is surely wrought with bias, as I only saw a very narrow slice of the system here, but I can’t help but wonder if the overall mindset toward healthcare in Ecuador is a bit different. It didn’t have that “customer service” feel that I sometimes encounter in the US, and I would guess some of that mindset has to do with the fact that public healthcare is so inexpensive here.

Ecuadorian Social Security, or IESS, is available to all legal residents (no age limits, no exclusions for pre-existing conditions) and costs 22% of national minimum wage, roughly $70 per month for an individual and around 4% more for each dependent. To put this in perspective, an average married couple pays roughly $80 per month total for public health services in Quito. This coverage begins three months after one signs up, and includes full medical, surgical, dental, vision, and prescription coverage. It is by no means a perfect system, but seems to be a great option for many people, and made me a bit more optimistic about the feasibility of someday introducing a public health insurance option in the United States.

Although I did not get to spend time in the private clinics of Quito, I did attend meetings in one private hospital (Axxis Hospital) and felt like its facilities were on par with many of the best hospitals in America. Enormous private rooms, marble floors, high ceilings, and gourmet restaurants seem to be typical in such institutions. Ecuadorian medical students I spoke to during the month confirmed these suspicions, and told me the private Hospital Voz Andes in Quito was an even better example of a completely modern, up-to-date hospital, often populated by local high-profile clients and foreigners flying in for state-of-the-art, private medical care. The overall impression I formed regarding this system is that it provides top-of-the-line care without waiting times, but only for those who can afford it, which is a tiny percentage of the Ecuadorian population, to be sure. 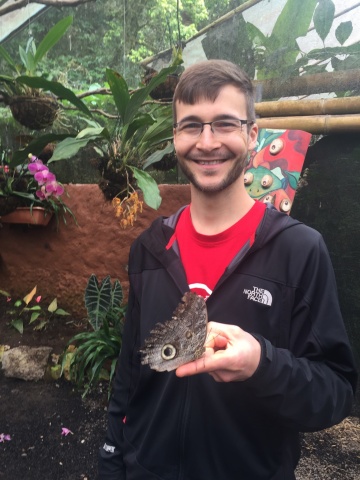 The butterfly garden in Mindo, a town in the Ecuadorian bosque nublado (cloud forest)

On a personal level, I felt that my greatest gains this month were not in medical knowledge; rather, they were in developing a greater appreciation of cultural differences. Patients frequently made it a point to tell me they felt incredibly fortunate to have easily accessible, quality healthcare. They were proud of their doctors, were happy with the care they received, and didn’t seem at all bothered with the slower pace and occasional access-to-care roadblocks I saw when comparing their public system to private and/or foreign models. They spent more of their days in generally active lifestyles (i.e. much more walking/standing than Americans, more physical jobs overall, more active leisure time) and seemed to place a high cultural importance on preventive care and staying healthy. 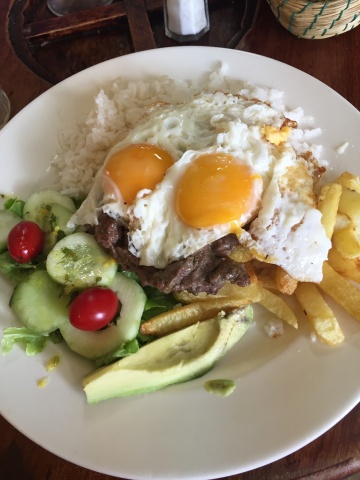 The trip reminded me that global health is much more than the narrowly defined medical care model we are often conditioned to accept; additionally, it encompasses a population’s mental health, religious/spiritual practices, and geographic/historical context. This experience also reaffirmed my desire to continue working with underserved populations and was a reminder to use God’s gifts in my life to continue giving back to others in both local and international contexts. 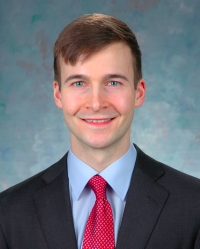 Daniel Driver is originally from Goshen, Indiana and is a graduate of Goshen College. He resided in Indianapolis, Indiana during his years of study at Indiana University School of Medicine.  During his final year he carried out his Student Elective Term in Quito, Ecuador through the Child Family Health International (CFHI), an international NGO based in San Francisco.