The Beauty and the Pain

“How do we weigh the beauty of this world and the pain of this world?” This was the question I asked as I sat on one of the most serene beaches you can imagine, in a conservancy in Papua, Indonesia.

Nina, a 12-year-old girl I knew from my volunteer work in Jayapura city, was on my mind: if only she could experience such tranquility and freedom. Perhaps, somehow, the troubles of the world wouldn’t weigh so heavily on her little body as she lived with HIV. Her father had died one month ago, from an AIDS-related illness. She had already witnessed her mother, who worked as a prostitute, die four years earlier. Nina had no one to take her to this beach, nor the means to pay for the airplane and boat tickets.

It wasn’t just Nina’s story that was weighing on me. It was the apathy and lack of empowerment I saw on many of the HIV patients’ faces while I volunteered at the hospital’s Voluntary Counseling and Testing center. It was the women who opened their homes to me and told me their stories of living with HIV/AIDS. It was the whole situation of Papua, a region that has seen its share of oppression, alcoholism, and high prevalence of HIV. I witnessed how social determinants of health played out. I saw the effects of racism, mistrust, and miscommunication in healthcare. There was much work to be done.

With all that is wrong in the world, what would my contribution be? As I look back on my life and what has led me to pursue a career in health as a physician assistant, I cannot overlook the impact of the stories of people’s lives—stories of loss, healing, and resilience—stories that remind me to keep going.

A story of healing. I can think of many people whose lives have touched mine. In an almost paradoxical fashion, I witnessed and participated in stories of healing as I listened to stories of pain. In the context of HIV, I witnessed the healing power of support—a force far greater than any anti-retroviral drug alone could do.

While I lived in Papua with Mennonite Central Committee’s Serving and Learning Together (SALT) program, I knew there was much work to be done. Yet where was I to begin? Or a better question—what did I have to offer? I felt I had barely anything to offer. With a degree in biology, I did not have concrete medical skills. And after being there six months, I did not have the cultural and language skills to take on any creative, major projects. I asked a previous SALT worker for advice. One thing he said that he regretted is that he did not record many people’s stories. This, I thought, was something I could do.

So, I decided to interview the five women with HIV I had come to know. I came up with a list of questions. For some, I needed all these questions and more and for others, their story spilled out like a beautiful river. I made their stories into a little booklet, “Life with HIV: stories from 5 women in Papua, Indonesia.”

I remember Lea’s story. When I met with her, she was staying at the Jayapura Support Group house to get away from the stress of her house while she was adjusting to her new medications and dealing with some depression. She told me the whole story of how her husband had contracted HIV before they were married, and she never knew. She faced stigma and discrimination. She told me of how people in her community, even her father, talk about “those people with HIV,” not knowing that she is one of “those people.” She tried to tell her mom once that she had HIV, but her mom told her to stop saying such crazy things. Besides her husband, the nurses and counselors at the clinic, and the other members of Jayapura Support Group, I was the only other person who knew her status.

“After I found out my status,” Lea said, “my heart was so heavy. I thought, God must have a different plan for my life. I was so worried about the child inside me. Would he be HIV positive also? I was angry with God. I thought, what did I do wrong? But, I knew I must keep thinking positive. Strength is from God, so surely I can do this, I thought. At one year and five months, after careful mother-to-child prevention, my son was tested and, thank God, he was HIV negative.”

As she spoke of the strength she once found, it was as if it was a reminder to herself that she indeed could be strong.

Then she began telling me of her most recent difficulties.

“I had a rash all over my body this past year. The doctor had me stop taking my anti-retroviral (ARV) medications so that I could take medicine to get rid of the rash. The rash went away, but at that point, I was so annoyed with and tired of taking medicines. It seemed like if I took medicine, I was sick, and if I didn’t take medicine, I was sick.

“So, I didn’t start taking ARV again. When I was off ARV, I could eat better and life just felt more enjoyable. I thought, God just take me already. I’m tired and weak. I called a friend from Jayapura Support Group. She said I needed to go to the hospital and meet with a doctor. The doctor asked me ‘Do you want to take your medicine or not? If not, sign here.’ This woke me up. I really did not want to sign my life away. I told myself, I can do this, I must do this, I must be brave. I don’t want to keep going forward and back, forward and back.

“I am angry with my husband, angry with God—that God is not just. Those who don’t have anger are angels, but we are human. Life is not about the past, but about the future. I just want to enjoy life, to live in grace and thankfulness. HIV has already reached people like me—an innocent housewife—but I will make sure that it does not spread past me.”

After the interview I stayed with her for a few more hours to keep her company. We made food and ate together. I taught her how to play the card game, Phase 10, and I’m pretty sure we played all ten phases. I cannot help but think that somehow my listening to her heart’s struggles made her heart a little stronger, a little more resilient. I hope and pray that she finds others who can listen to and support her. As we share stories, we lift the heaviness off of our weary shoulders and we re-distribute the weight of our burdens. The listener and the story-teller find themselves an inch closer to healing.

I am convinced that if everyone in Papua knew Lea’s story, the region would see a decrease in HIV rates. Stigma, ignorance, and discrimination would decrease, and empathy would increase, opening the pathway toward healing. No, they cannot be “cured” from HIV, but they can find restoration. With the right support, nutrition and medication, they can live 15, 20 or more years. The problem is, even though 3% of Papua’s population has HIV, I rarely met a person who knew someone with HIV. This silence creates the perfect conditions for HIV rates to sky-rocket. Perhaps if these women’s stories were told and the silence broken, there would be healing and freedom.

Maybe when we do not know how to fix a broken world, we start with listening–one story at a time. As Joan Borysenko, PhD, states, “I have always been convinced that we heal one at a time, and as each one of us heals, we affect the people around us in ever-widening circles, like a stone tossed in a pond.” How do we weigh the beauty of this world and the pain of this world? Why do some people have long, joyful lives and others—like Nina and her family—have shorter and more painful lives? I may never know. Yet, I do know this—I will seek out beauty and let it inspire my soul. I will seek out those who are in pain, listen to their stories, and together, search for healing.

(Pseudonyms were used in this essay) 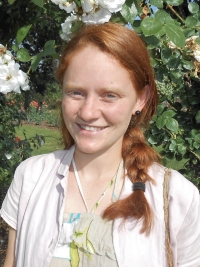 Nicole Groff currently lives in Lancaster, Pennsylvania. For the past two years she worked as a CNA (certified nursing assistant) at Conestoga View Nursing and Rehab. In her spare time, she volunteers, plays music, enjoys cooking, dancing, and being with friends and family. Nicole obtained her Bachelor of Science in Biology from Eastern Mennonite University. She currently attends Laurel St. Mennonite Church. In August, Nicole plans to begin a dual-degree master’s program in global public health and physician assistant studies at Emory University in Atlanta, Georgia

Annual Gathering > The Beauty and the Pain