When Tim met Kathy:
Dreamer boy and homeless girl grow up and team up

This fall, Kathy Wiens is publishing Dumps, Bars and Other Childhood Hang Outs. She plans to use the book as a springboard for speaking engagements and workshops about childhood abuse and neglect.

Kathy offers workshops on childhood development as well as abuse of children. A teacher during much of her life, she holds bachelor’s and master’s degrees in elementary education and is pursuing a master’s degree in mental health counseling.

But a different kind of education started Kathy down the path of teaching others about child abuse – the education of life. Her new book is based on her own childhood memories of being homeless, bruised and abandoned.  In a newspaper’s letter to the editor earlier this year, she wrote, “On the last day of my kindergarten year my family drove out of the small Nebraska town of Ulysses and drove to Lincoln, Neb. When we arrived in Lincoln we had no place to go. We were homeless….The next time I was homeless was with my mother. This time we stayed in the home of my mother’s “friends.” This was even scarier… My mother was an alcoholic and the people we stayed with also used alcohol and their behaviors frightened me.

Eventually her life turned around in  a safe, nurturing adoptive home. 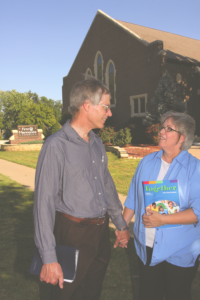 Kathy and her husband, Tim, both found redemption from difficulties when they were young. Their turnaround experiences have led them to team up to offer hope and help others who are in difficulties, especially children and youths.

More than two decades ago, Tim and Kathy were walking through their neighborhood in Newton, Kan., pushing their 2-year-old daughter, Terra, in a stroller and discussing their day. Tim, a family practice doctor, talked about the growing problem of people not being able to afford medical services. Kathy, sensitive to struggling people because of her own experiences, dreamed with him about better serving people in the local community.

Through the support from their congregation, New Creation Fellowship, and other church and civic leaders, Tim then spearheaded a group to found Health Ministries Clinic to serve low-income residents in Harvey County. The clinic today has expanded into a community health center that serves much of south-central Kansas. While his family practice is based at another clinic, he continues to provide medical services at Health Ministries. These threads of compassion have  woven through their lives as they focus on serving marginalized and powerless people in society. 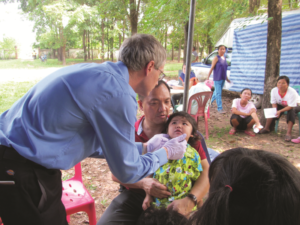 Tim has formed teams to do medical mission work in Asia. And the couple has supported their local homeless shelter. What has increasingly captivated their hearts is the suffering of children who struggle in difficult family situations to find belonging, identity and trust.

To help congregations and communities better nurture and value children, Kathy has founded a ministry, Welcome the Children. Kathy’s experience from childhood, including being taken from her family of origin and being placed in an orphanage, fuels her passion.

At age 11, Kathy went to live with the late Floyd and Erma Burkey and became part of their family and Bellwood Mennonite Church in Milford, Neb. The affirmation and love of her new family and faith community brought healing as she developed a sense of trust and safety. 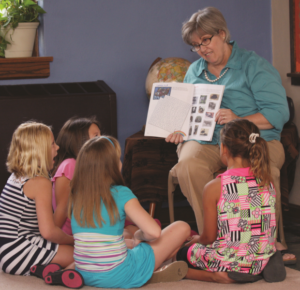 She believes Christ mandates us to be stewards of the youngest – and most vulnerable – generation. “In three of the four gospels, Jesus tells his disciples to ‘let the children come,’” Kathy said. “So it seems to me our congregations could value more significantly what Jesus himself valued.

“Statistics show that children under five comprise the largest population of people in poverty,” she said. “And early childhood is when children are growing and developing into who they will be. Those are the years when they are also the most powerless and most dependent on the adults who care for them.”

Kathy’s life experience, turning childhood wounds into her adult passion, influenced Tim to connect with his own childhood story. Tim did not experience early childhood trauma like Kathy. But he struggled with insecurity that paralyzed him as a teen and into young adulthood.

“When I was a kid, I had this strong desire to be great,” he shared recently in a testimony at their church. “Not only to be great, but to be the greatest – the richest, smartest, strongest and fastest. “However, throughout high school, I had a deep insecurity – self-centeredness and low self-esteem,” he added. “I was socially inept, introverted and didn’t fit in well.” To compensate, he became a great student and carried his academic gifts to Bethel College in Kansas.

But his achievements came at an expense. The year after he graduated, he endured a crisis, affecting his faith, emotions and health. Losing 45 pounds, he wasn’t sure he would make it through his 20s.

During this low period, he decided to take a Mennonite Voluntary Service assignment at a community center in in Hamilton, Ont. “Here I was, very introverted and doing social work type things,” he said. “It helped me focus 24/7 on all the people I was with. … I constantly had to think of others, pray for others and care for others rather than myself.

“I gained more than I ever gave to others,” he said. “I gained self-esteem, self-worth and the ability to relate with other people. Most of all, I gained a beginner’s love for others through this act of service. My definition of greatness changed to a desire to serve and love others.” 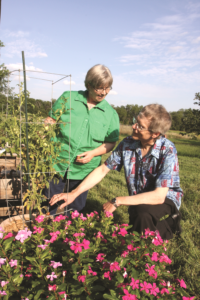 Tim and Kathy married in 1985 after meeting at Mennonite Church of the Servant in Wichita, Kan., when he was in medical school and she was teaching low-income children in the public schools.

They are very different in background and personality. Yet, their common experience of becoming more whole in Christ has unified them over the years in an ongoing desire to nurture children and young people.

Today, Tim serves on the Outreach Commission where they now attend church, First Mennonite in Newton, where he encourages young adults to seek short-term mission assignments. A former youth sponsor, Tim also nurtures the faith formation of children with his occasional teaching in Sunday school and vacation Bible school.

“We are deeply committed to the church and see the main struggle of the church today is the dropout of youth,” Tim said. “The key elements of faith are trust, worth and belonging. So it’s critical we employ these elements in our relationship to our children, or we’ll lose them. The kingdom of God belongs to them.

When her new book comes out soon, Kathy will donate sale proceeds to organizations ministering to children, including Cedars Children’s Home in Lincoln, Neb., where she lived before being adopted. 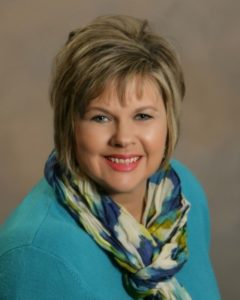 Laurie Oswald Robinson, a longtime journalist, author and speaker, lives in Newton, Kansas, with her husband, Al. She is founder of Tales of the Times, LLC, a communication business in which she serves as a writing coach. She coached Kathy in her process of writing her new book, Dumps, Bars and Other Childhood Hang Outs.