Last week I went to a town council meeting. I don’t usually attend these meetings, but this one was different. The agenda included a request to change a bylaw to allow for the building of a low-barrier home for persons in the downtown area who are homeless. 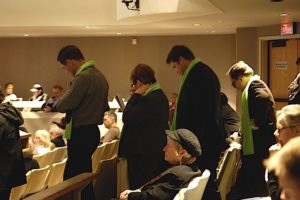 I was surprised by the attention that the meeting drew. The moment I entered the foyer, a woman stationed by a cardboard box bursting with green scarves accosted me. “Wear it if you’re for the homeless.” In the meeting room the seats were full and I was obliged to stand in the back with about fifty other latecomers. When the time came for questions, at least a hundred people pushed through the crowded aisles to line up at the microphone. For every businessman pleading with the council not to change the bylaws, two green scarf-wearers alleged that the council would be cold-hearted to prevent such a change. The meeting went on for hours; the paranoid business people and the scarf-wearers remained polarized.

Having worked among the poor overseas, it might seem obvious that I would be on the side of those with the green scarves. But I was conflicted. I knew some of these business people appealing their case at the microphone. I sympathized with their fears. Well into the question period, a man who works among the homeless came to the microphone. Shockingly, he wasn’t wearing a green scarf. Did he forget to wear it?

In New York in the early 1980s the Times Square Hotel and its surroundings was known for peep shows and prostitution. The hotel was on the verge of being condemned and there were almost a thousand homeless people in the immediate area. Rosanne Haggerty, a resident of the community, decided something had to be done. She rallied fellow residents and local businesses to renovate the hotel in order to improve the aesthetics of the neighborhood while providing housing for those in need. Then she organized a group of community volunteers to spend time on the streets with the homeless to better understand their concerns. Now, decades later, the hotel fits nicely into the high priced surroundings with its gold-trimmed ceilings and marble lobby. Living there are 650 people who once frequented New York’s homeless shelters and are now successfully blending into their community. Additional solutions were generated by the community as well.

If you visit the streets around Times Square today, the homeless are no longer there. The New York project was a resounding success. Others wanted to get in on the act. Governments, including mine, poured money into similar projects. However, they missed the key reason why the New York project was successful. In New York the solution was triggered by a community that worked together, not by money. In contrast, the green scarf troops rallied because of a massive government grant to build a building. Meanwhile, the business community was alienated. Is this why the man who works among the poor refused to wear a green scarf?

On my trips to Congo, I used to take my travelling colleagues to two Kinshasa health clinics. One clinic was started by a well-funded group from the outside, interested in meeting the health needs of the poor. The second clinic came from the vision and commitment of people with few resources from within the community. The first clinic was depressing to visit. It was empty, the staff were unmotivated and the management had other things on their minds. The second clinic, though, was inspirational. It was brimming with activity, the staff were committed and the management had a passion for the community. No doubt, a health clinic in a poor community is a good idea. Yet, if it is not triggered by the grassroots, its impact on community health may be limited. Seeing the man without the green scarf reminded me of an upside-down principle. Don’t follow the money. Follow the people.