During high school, I had the opportunity to go on my first international mission trip to Haiti. My church had established a relationship with an American doctor in Haiti and we had the opportunity to visit his clinic during the trip. I was impressed by the way the doctor was able to use his medical skills to build relationships and then use those relationships to impact the local community in many different ways. That mission experience was the origin of my interest in medicine and also my love of traveling and learning about new cultures.

When I entered medical school, I knew that I wanted to experience medicine in an international setting in order to gain a different perspective on practicing medicine without the luxuries offered at a large academic health center. I specifically wanted to improve my physical exam and diagnostic skills, anticipating that I would need to rely mainly on those skills when treating patients in a third-world setting. I also hoped to develop a better understanding of the influence of culture and tradition on patients’ perception of and relationship with medicine.

The Student Elective Term (SET) scholarship program of Mennonite Healthcare Fellowship offered me the opportunity to spend a month at Macha Mission Hospital in southern Zambia. During that month, I participated in the care of patients admitted to the hospital, assisted in the operating room, and saw patients in the hospital-associated outpatient clinic. The month at Macha allowed me to gain the experience I sought in physical exam and diagnostic skills as well as taught me how to evaluate and utilize my current context and resources in order to provide the best care for my patients. 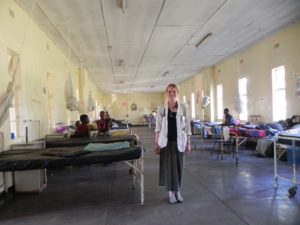 Upon arriving at Macha Mission Hospital, I was at first struck by the contrast between the mission hospital and the academic medical center associated with the medical school I have been attending. Rather than hallways of private rooms with thousands of dollars of medical equipment in each, I found four large wards lined with beds on each side. The concept of patient privacy that had been stressed since the beginning of my medical school experience seemed non-existent in such a setting.

In addition to differences in the setting, I also quickly recognized differences in available treatments and protocols for addressing various disease processes. One such experience occurred when I arrived early one morning for rounds on the female ward. The attending Zambian doctor had not yet arrived. As I entered the ward, I saw a new patient who appeared to be in significant respiratory distress. She was unable to speak to me as she was breathing quite rapidly and struggling to take in each breath. Looking in her chart, I learned that she had a history of asthma and concluded that she must be having an asthma attack. I quickly found the nurse and asked her to bring me oxygen, but was told that oxygen was only available in the pediatric ward. I then asked for albuterol, but learned that we could not give albuterol by nebulizer and I would not have access to an inhaler until the pharmacy opened in over an hour. Frustrated and unsure of what to do, I ran to another ward to get help. On the way, I found the attending Zambian doctor and explained the situation. While he agreed with what I had tried to do, he explained that none of those treatment options were available in our current context. Instead, he suggested that I ask the nurse to administer aminophylline through an IV. Up until that point, I had never heard of the drug aminophylline, but I later learned that it is an older drug that was used in the past for asthma exacerbations. After we administered the drug to the patient, her breathing slowed and she no longer struggled to take a breath. This experience challenged me to stop thinking about how I would do things if I were in the U.S. and to instead strive to learn the best way to treat patients in my current context with the resources available.

In addition to seeing patients in the hospital, I also had an opportunity to learn about the Macha Research Trust, which has several buildings adjacent to the hospital. I appreciated hearing the story of the American physician who recognized the need for malaria research after arriving in Macha in the 1980’s and finding the hospital full of patients, especially children, dying from malaria. The Macha Research Trust originally focused only on malaria research, but had such a significant impact on the community that there were not enough malaria cases to fully support the research. During my month in the hospital, I saw very few cases of malaria and of the cases I saw, all were from distant villages outside of the Macha area. The Macha Research Trust still does significant malaria research and has expanded to other parts of Zambia, but now also seeks to address other health issues affecting the Macha area, such as HIV and tuberculosis. Hearing the story of the Macha Research Trust was a significant part of my experience because it emphasized for me the importance of making health changes on the community level as well as the level of the individual patient. 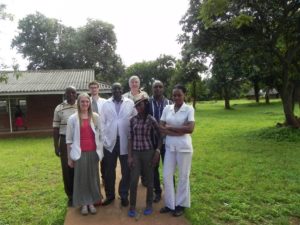 One important aspect of addressing health concerns on a community level is knowledge and awareness of cultural issues that influence the community’s understanding of health. During my first week in Macha, one of the Zambian doctors asked me if I knew the origin of several scars on the chest and abdomen of a female patient. The scars were small, vertical, linear marks about one to two inches long. I could not think of a good explanation for what would have caused them. The doctor explained to me that these were the marks of a traditional healer. Typically, the traditional healers make multiple linear cuts with a razor blade and then rub herbs into the cuts that specifically address the patient’s particular ailment. After these scars were pointed out to me, I started noticing them on many of the other patients I saw. When I asked the doctors in the hospital about their thoughts on traditional healers, they emphasized the importance of recognizing that many patients see a traditional healer and also come to the hospital for care. As physicians, their goal was not to stop patients from seeing a traditional healer, but rather to educate patients about what medical conditions require them to seek care at the hospital first. One physician recalled that when malaria was rampant, parents would take their children to traditional healers first and only come to the hospital when the child had developed cerebral malaria, at which point it was often too late to treat successfully. The physicians urged parents to bring their children to the hospital first and to visit the traditional healer on their way home from the hospital if they still felt that would be beneficial for their children. In this way, the physicians were able to respect the cultural beliefs of the patients while still providing appropriate medical care in a timely manner.

As I reflect on my experience in Macha, I identify the month as one of my best experiences in medical school thus far.

As I look forward to beginning my residency training in family medicine, I recognize the importance of all of these learning points in my future career. Just as I was drawn to medicine after seeing the impact of the American doctor on a Haitian community, I chose family medicine for the role that family doctors play in impacting the health of entire families and their communities.

My experience in Macha gave me the opportunity to experience a health care system that has sought to address the health needs of a local community in a culturally-sensitive manner while using resources available in that specific context. Although I do not yet know in what context I will practice as a future physician, I anticipate that the experience and skills I gained at Macha will help me to provide context-specific care no matter where I may be located. 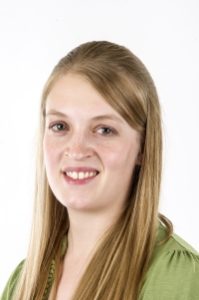 Brianna Moyer, MD graduated in May 2015 with her MD degree from Penn State College of Medicine in Hershey, Pennsylvania. In June, she starts her family medicine residency at Lancaster General Hospital in Lancaster, Pennsylvania. Originally from Souderton, Pennsylvania, Brianna currently lives with her husband, Daniel, in Hershey.