A Funding Model for Mission

Over the course of the summer months, the Board has been sharing a strategic plan for the ongoing development of Mennonite Healthcare Fellowship (MHF).  The plan consists of four major points, two of which have already been shared.

This brings us to the third point in the strategic plan.  Consolidating assets on its own does not address the yearly budget situation.  To do that, the Board looked at the funding model of the organization.  For the first five years, MHF has relied on a funding model similar to the one used by both MMA and MNA.  This is primarily a membership dues model in which the work of the organization is supported by persons who become “members” of the organization by paying a certain amount each year in “dues.”

However, the membership dues model has not remained pure.  Over the years, even back to MMA/MNA days, the model has been modified when a dues structure was not meeting the financial needs of the organization.

However, from a legal standpoint, all “dues” and “additional contributions” for whatever designated fund were considered donations and thus tax deductible under U.S. federal income tax guidelines.  Thus, MHF inherited and has continued to use a membership dues model which has been increasingly modified toward a contributions model to sustain the organization.

Two graphs illustrate the results of using this model over the five-year history of MHF.  In the first, we see contributions income over the five-year period by fiscal year.  The second is a chart of membership during that same time period.  (Double-click on each image to see a larger view.) 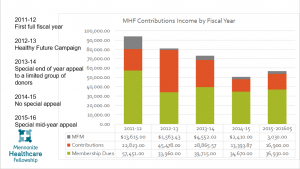 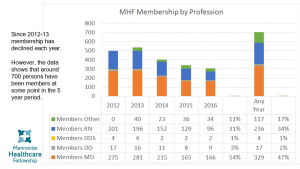 In both cases, an overall gradual decline is noted.  The conclusion is that previous members of MMA and MNA still have interest in MHF but are no longer steady in their yearly giving, but in many cases, dropping out due to age or death.  At the same time MHF is attracting new members, but not the numbers that were projected from a wider a variety of professions and not many in 20’s and 30’s.

In the current fiscal year, we are starting to reverse the decline in giving by initiating additional fundraising appeals during the year.  Thus, the third point in the strategic plan calls for MHF to continue the shift from a member dues funding model to a contributions model in support of the refocused mission outlined in point number one.  In some ways, the shift is subtle, but in many other ways, it is highly significant.

It is important to note that legally speaking, MHF has never been a membership organization.  Ultimate control of the organization rests with the Board of Directors and that Board is self-perpetuating. For practical purposes, however, we have been using the language of members to define who is able to serve on the Board as well as how MHF is growing (or shrinking) as an organization.  That will not change; MHF will still talk about members, those who support the organization.

However, MHF will no longer use the language of “dues.”  Instead, we will try to consistently use the language of “contributions.”  We will continue to suggest levels of giving according to life stages and financial ability but in the end rely on individuals to self-select their level of giving. In addition, contributions can be made at any time of year.  It is likely that MHF will continue asking for contributions at these key times:

Focusing on contributions instead of “dues” also has the following implications for me as an individual member of MHF:

The Board sees the shift from dues to contributions as a strategic step to encourage greater participation and greater financial support according to the ability and interest of each prospective member.  As always, we value your comments and suggestions.

Board > A Funding Model for Mission