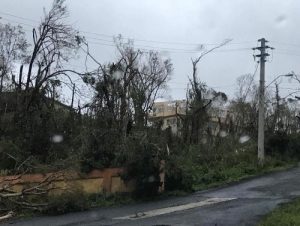 On September 20, 2017, the island of Puerto Rico was battered by Hurricane Maria. The storm came ashore with sustained winds of 155 mph and caused widespread damage. The entire power grid was wiped out, communications were down on most of the island, many people were left without water, and an estimated 70,000 homes were destroyed. There was widespread flooding, roads and bridges were destroyed or impassable, and trees were uprooted and defoliated.

Mennonites have had a long history and service with the establishment of churches particularly in the east central part of the island. Over the years, the Mennonite Hospital has grown to the point where it has become Sistema de Salud Menonita (Mennonite Health System), the largest health system on that part of the island. Sistema de Salud Menonita is also the largest member institution of MHS (Mennonite Health Services) Alliance.

MHS, in cooperation with Mennonite Disaster Service (MDS) and Mennonite Healthcare Fellowship (MHF) has initiated some visits by resource teams to ascertain how Mennonites on the mainland can be helpful to the Mennonite Health System, the three Mennonite conferences, the Mennonite schools, and the rural communities served by these church institutions. This work is intended to supplement the normal work of MDS to help communities rebuild.

The focus of this project has developed around a response to the intense trauma. Not only have Puerto Ricans lived through monstrous storm that lasted more than 24 hours, but without electricity, water, and related services for so long, the trauma has extended for months. With that comes the loss of family and friends as vulnerable people and those whose work has been shattered have moved to the mainland in order to survive. Children are especially vulnerable to the effects of trauma.

Carolyn Holderread Heggen, a psychologist and trauma expert from Corvallis, Oregon, has been a primary consultant for this joint project as well as doing some initial workshops for pastors, churches, and mental health professionals on the island. Dr. Rose Alvarez Gillen, a physician from Goshen, Indiana, and a member of MHF, has volunteered time to coordinate this effort. Both of these women grew up in Puerto Rico, are bilingual, and have extensive connections. Paul Leichty has represented MHF on an advisory committee which met in Kansas City in March to put together the heart of a proposal which is to be considered by MDS in August.

The Sunday morning offering at Annual Gathering 2018, June 22-24, 2018 at Bluffton University, will go to this project. A larger goal is for MHF members and friends to raise $10,000 in individual contributions to the project to go along with MDS funds and fundraising among the members of MHS Alliance.

If you would like to give to this project, please click on the form below to use Paypal, a major credit or debit card, or an E-check Pledge (ACH directly from your bank account). (More informationon the Payment Methods page.)